Punjab Public Service Commission PPSC Headmaster, Deputy Headmaster Written Test Result 2023 10th, 11th September check online from pakijobs.pk. There are 125 Headmaster and Deputy Headmaster jobs are announced for the School Education Department Punjab. Punjab Public Service Commission PPSC is an government organization that take care of all the government recruitment as for every government post recruitment there will be a PPSC written test taken from all candidates who submit their application form for that job and are willing to go through all the selection process. All those candidates who pass out this written test are said to be clear and they are able to serve that government organization but if they are not able to clear that PPSC written test result then they are not selected in any case. That is why your selection and rejection is totally based on this PPSC Headmaster, Deputy Headmaster Written Test Result 2023.

According to the Punjab Public Service Commission PPSC official they declared that all the candidates who submit the application form for the Headmaster and Deputy Headmaster jobs in School Education Department Punjab can appear in the written test on this Saturday and Sunday that is 10th, 11th September, 2023 and then after one or two weeks the officials of the PPSC examination department will then announce PPSC Headmaster, Deputy Headmaster Written Test Result 2023. On behalf of this result you will be select or reject. The Complete marks in each of the subject is provided here on this page that can be check by the Name, Roll No or CNIC number that you write while submitting the application form for the PPSC jobs. 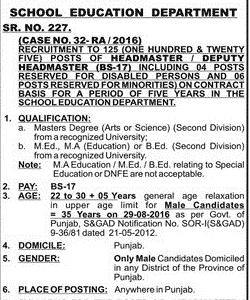